It’s still unsure what amount of damage the extreme cold and relatively snow-free winter did to the crops planted in autumn, but visibly, a lot of wheat and rape has frozen. As soon as the weather allows it, on these land parcels, new, spring crops will be planted, after ploughing. Zsuzsanna Pajdl agronomist told us that crops planted in the optimal time, between 5 and 25 October 2016, are in excellent shape and growing steadily. As for the crops planted in November, due to the harsh temperatures in December, the situation is much more dire. 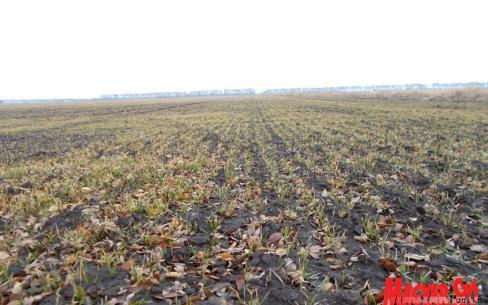 ‒ We see that some wheat parcels are getting more and more yellow, but still can’t determine which we’ll have to plough through for the spring. In any case, there is a very effective technique which land owners can use to determine whether to fertilize the parcels or not. This is how it goes: a 25x25cm square should be cut out of the parcel, together with the wheat. If the earth is a bit dry, then we water it, and put it away for 2-3 days to a darker place, with 10-15 degrees celsius. That’s the wheat’s growing temperature. After 3 days, we take the square to a warmer place with more light, on at least 20-22 degrees celsius. If the wheat made it through the frost, in approx. 10 days the crop should begin to grow. At the same time, it is visible at the tillering core, whether the stem got damaged or not. If the wheat still stays yellow, it has frozen.

She added that if you do not have the patience to do the experiment, you should wait for warmer weather and the start of vegetation. Then it will definitely be clear what happened.

‒ Considering that most contemporary wheat varieties can withstand cold temperatures up to -15 degrees celsius, we’ll just have to wait for warmer temperatures to see the amount of damage to the crops around Srbobran – said Zsuzsanna Pajdl.

She also pointed out that the fertilization with Urea can start as soon as it’s safe to go on the land, and then in March with AN or similar fertilizers. This all, of course, for crops which have visibly survived the winter. Workers should take advantage of morning frost, when they can safely go out on the land and evade mud, spreading the fertilizer in peace on the frozen ground.

‒ At the same time, it’s very important to leave a lasting trail on the parcels. Where the tractor and sprayer go through with their tires, one shouldn’t plant a couple of lines of wheat, in that way, it will be much more easier to manoeuver all up to harvest. And the fertilizer and sprayer machine should be calibrated so to spread the chemical between these trails – said the agronomist.