Although colder than usual, each day Subotica sees a couple of smaller migrant groups. We meet them on the streets, in shops, on the bus. For months now, the migrants have been part of the every day life of Kelebija citizens, they see them close to the border, in the forests, basically everywhere. People are concerned about public safety, children go out only with their parents and no-one leaves their home at night if they don’t really need to. 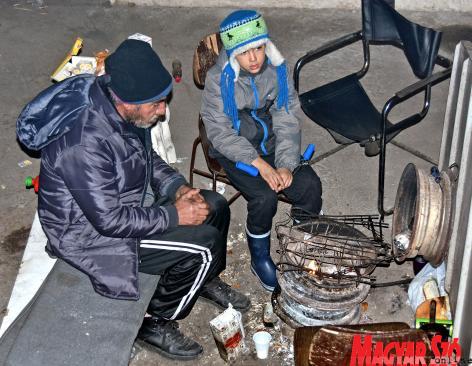 Grandfather and grandson warming themselves by the fire (Photo: Árpád Gergely)

During our field trip, we first visited the migrants in the free shop buildings between the two borders. We wanted to know how much are there in the building and when they can pass the Hungarian border. Getting closer to the border, we noticed smaller groups of migrants here and there. Men in their twenties and thirties were gathering out in the cold. Between the two borders, in the former free shop building, we found three bedrooms, and a sort of a kitchen, with two smaller gas tanks serving as cookers. Beside the kitchen, a row of plastic bottles filled with urine. We were guided to the abandoned building by Abet Aligasem, representative of the migrants present there. 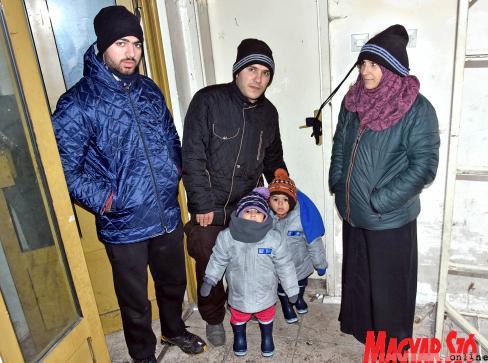 The two-year-old twins in the freezing cold (Photo: Árpád Gergely)

In the ice-cold building, among others, there was a couple with two-year-old twins, waiting to pass the border. We found out that the border guards let five to six migrants through daily, if they have the appropriate papers. Our temporary guide tolds us that, in this transitional place, as he called it, migrants stay only a day or two. There were about fifteen people in the place, he said, but this number quickly increased when the workers of the Humanitarian Centre of Integration and Tolerance arrived with warm clothes, as everyone needed some in the freezing cold. Although we would have liked to, the workers of the centre could not be interviewed, they had no permission for it. In the basement of the building, beside an improvized fireplace from a washing machine’s body, a woman with his ten-year-old son and an older man was warming himself, while another twenty-five younger men were sitting and standing beside a campfire outside, in the back of the building. Others were talking in groups, some distance from the building. Abet Aligasen was a kind of organizer here.

– I’m trying to help my companions understand each other with the Serbian and Hungarian authorities, a lot from them don’t even speak English. I’ve been here for fifteen days now, voluntarily. Every morning, the Red Cross brings food appropriate for two meals: breakfast and dinner, but during the day, other humanitarian organizations also make a visit. As I know, there are over ten thousand migrants in Serbia at the moment, three thousand of them don’t have any personal indentification documents. About a hundred migrants come to Serbia from Bulgaria daily, but only five or six are let through the border to continue their journey from those who have their papers with them, so the whole thing turns out to be quite lengthy and slow – said the Abet Aligasem, who calls himself a communicational leader. 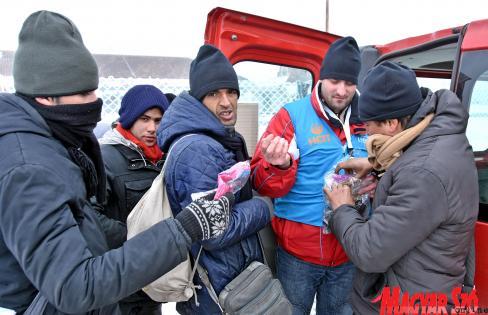 In Kelebija, in the streets close to the border, we tryied to ask a couple of questions about the situation, but no-one came out of their houses to our knocking. Only the echo of dogs barking followed us. We only came across a woman on a bicycle, hurrying home, who told us, rather shortly, that the people here were scared of the migrants. As she knew, no-one was attacked yet, but there keeps getting more and more of them.

We talked on the telephone with Sanja Milošev, vice-chairman of the Assembly of the Local Community of Kelebija, about the migrant situation. She told us that, on the recent Assembly of the Local Community, a decision was brought to contact the police and ask for help, in order the calm and protect the citizens of the settlement. They will ask for increased police patrol and police control in the vicinity. She also told us that no-one from the local community reported any form of trespassing or assult from the part of the migrants. At the same time, she confirmed that people are scared from the mere presence of the migrants, them being everywhere they look: at the border line, in the streets close to the border, in the forest as well as the bus stop nearest the border. Children are not let out without parental supervision, while at night, only those who really need to, leave their homes.