One statement heavily differed from all others on the the regional conference of minority and local media held in Novi Sad. “We must touch upon a subject which effects both minority and local media, and does not do them any good, to say the least” – said Zoran Sekulić, President of the Presidential Committee of the Serbian Media Association. It is feared that media will soon get to a dead end, the National Media Strategy, accepted in 2011, will end in December, and a new one should have been made by now, but there is nothing on sight, at least not for the general public. The new Government will celebrate its 100th day of work on 18 November, but it was not even capable of pointing out the new State Secretary for Culture and Information. According to Sekulić, this tells a lot about politics’ interest in media. 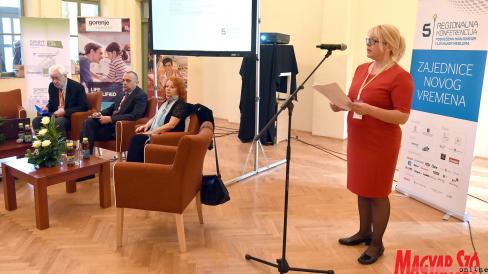 Without a State Secretary, we must turn to the Minister with our problems. The only problem is that he avoids answering questions. About the National Media Strategy, I fear it is already being written in a secret office, and that it will be presented to us at the very last moment, not giving us any time to modify and analyze it. You can be sure about one thing: the Association will not allow such treatment – said Sekulić.

The leading topic of this years conference was social integration as a phenomenon, and connected to this the position of minority and local media in modern society, as well as the question of national identity and culture. One of the highlights was the subject of being part of a community and the importance of this belonging. Another topic was whether national minorities feel as if they are part of their local community. Participants answered all these questions with personal experiences, listing examples of good practice.

Nataša Heror, representing Heror Media Spot, greeted the participants. Afterwards, Márta Varjú, Editor in chief of Magyar Szó, then Bojan Brezigar, Executive Committee member of the The European Association of Daily Newspapers in Minority and Regional Languages (MIDAS), and lastly, Đorđe Milićević, Provincial Deputy Prime Minister. Milićević said that multiculuralism and an environment with multiple nationalities is familiar to us all, and being informed in such an environment is only natural. As it has so far, the Provincial Government will continue funding the work of minority medias. He pointed out that more than 90% of these assets are for the support of minority medias, which was 264 million RSD this year.

Minority media should be made more recognizable in media, said Vanda Kučera, Business Director of the I&FMcCann Group, during the panel discussion about new media concepts. A lot of people do not know how to contact minority media with their advertisement and promotional ideas. She thinks it useful to popularize the Heror Media Spot, as the network of minority media in Vojvodina.

István Bodzsoni, Director of Pannon RTV, on the panel focusing on the effect of media on community life, stressed the importance of the spread of information, which in his opinion, is one of the requirements for a minorities survival in any environment. He pointed out that the most serious issues are the formation of a skilled work group and the geografical diffusion of minorities, which causes problems in frequency distribution. He suggested positive discrimination during the allocation of frequencies for minority media.

Continuing the panel, Momčilo Bajac, Program Director of the Novi Sad 2021 Project, talked about the ideas and plans behind the European Capitol of Culture, during which a significant role will be given to the presentation of minorities and cultural diversity.